**COVER REVEAL**
Title: TIED TO YOU
Series: Wild Side book two (can be read out of order)
Release date: April 25, 2017
Cover Design by X-Potion Designs
No preorder at this time.
Goodreads link: https://www.goodreads.com/book/show/34739893-tied-to-you
Blurb:
Miles Sorenson prides himself on his brutal honesty. Facts and logic are a hell of a lot easier to deal with than emotions. He’s got his career and a small, close-knit group of friends, and he doesn’t need nor want anything else. The total opposite of Quinn Barker, who doesn’t take life too seriously and thinks a good laugh can cure anything.
When Quinn takes Miles home, it’s supposed to be a one-time deal. Except they really click in the sack and end up spending the weekend together, enjoying each others’ bodies as much as their company…to Miles’ dismay. Matters get even more muddled when, months later, they run into each other at the popular West Hollywood bar, Wild Side, and pick up right where they left off.
On the surface, Quinn and Miles are like oil and water, but the draw between them is undeniable. As their lives further entwine, they realize there’s more to their connection than the way they singe the sheets together.
But demons from the past have a way of catching up, and no matter how strong the link is tying Miles and Quinn together, the pressure may be enough to make it snap. 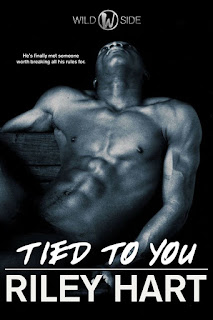